"Falling out of love equates to losing faith that the person you're with can support your emotional needs."

It's sort of a deep quote.  I've got to tell you.  The day I heard it, my eyes opened wide and I thought, "Why am I only just now hearing this?"  It's too big a thought for this little blog...  and that's a story for another day.

I just keep thinking that it applies to running on some level.  Anytime I hear someone who says, "Oh, I used to run but...".

And if it doesn't exactly apply, maybe it should.  Maybe it's true of anything in life.  We have to believe that what we believed in once is worth working for...  It's just hard to recapture the love once the faith is gone.

Thus the reason I went for a recovery run this morning.  It was a date with my run.  I think dating is important, even when you've been with your Run for a while.

I was told by my Marathon Training Team coach that a recovery run should be so easy that it feels like your legs are getting stronger as you run, that they're filling up, rather than emptying or being depleted.  And you know, today's run was exactly that.  And if you're going on a date with your run, shouldn't you finish it with either a runner's high or the feeling that your legs are stronger?

I'd like a Hot Naked Clear Run, a single serving please

I remember not that long ago I went out to run a half marathon.

I hadn't trained for it.  I just woke up on Wednesday as a person who goes running because she likes to run, and on Saturday I ran a 10 minute PR on a hilly course.  I didn't question my ability to run 13.1 miles.  I'm a runner.  Of course I can run 13.1 miles.

Here is a place where I dropped my mileage for a week and am now dreading my long run next week.  Today I actually thought, "oh, I hope I can make the miles."

It's as though my zen state of running that I achieved over the month of May has been completely extinguished by the act of registering to run another RVA Marathon.

I enjoyed being unencumbered by a training plan.  I enjoyed just running because it was Tuesday and we run for an hour on Tuesdays.  I need to recapture that freedom to run, but still follow a plan.

And it felt really good.  Almost naughty.  To run that free.  ~gasp~ she pulls her hand up over her parted mouth... did anyone see?  No one who mattered saw, or judged.  And maybe because no one could see, and therefor no one could judge, I added an extra mile to the well known route.

Solo-Naked-Clear-Hot running.  Hopefully it's a good recipe for Run Love.

"When people ask me how they should approach performance, I always tell them that the professional musician should aspire to the state of the beginner.  In order to become a professional, you need to go through years of training. You get criticized by all your teachers , and you worry about all the critics. You are constantly being judged. But if you get onstage and all you think about is what the critics are going to say, if all you are doing is worrying, then you will play terribly.  ...Instead, one needs to constantly remind oneself to play with the abandon of the child... because why is that child playing?  He is playing for pleasure.  He is playing because making this sound, expressing this melody, makes him happy.  That is still the the only good reason to play."  Yo-Yo Ma

I'm reading a book called IMAGINE by Jonah Lehrer.  It's stellar.  Two minutes into the book and I was completely inspired again.  Yes, a month or more of inability to write has been forgotten.  I now have too many ideas to work with.

I'm on the Outer Banks of NC on vacation with my children.  I've been struggling with some kind of summer virus, so the bulk of my vacation has been spent either in bed napping, or in a beach chair stretched out with my toes buried in the amber grains of sand.  The grit that works into my skin is warm and soothing, and the strum of the ocean lulls me into a relaxed state.  The skies to the North and South of us have been grim, lined with black clouds, but so far little has impaired our ability to have fun. 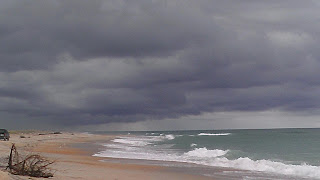 While I was sitting in my chair watching my children play, I happened across the passage in my book that talks about letting go and playing with the abandon and joy of a child.  B'nut was running into the surf as it retreated, and then, with a squeal of glee, she would turn and race the churning wall of foaming white water that charged up the beach toward her.

I mused aloud that she is a very fast little runner.

And that she wasn't worried about getting caught by the water.

She never looked back at the roar bearing down on her, keeping her rich brown eyes skyward as she trailed peals of laughter behind her.

Keep in mind, B'nut getting caught by the water at a strategically bad moment would probably result in my dropping everything and sprinting to the ocean to right her before the water pounded a sense of fear into her.  But maybe not.  She's a pretty sturdy child.

Regardless, she was fast enough to avoid the wrath of the Atlantic yesterday.

Her sense of joy and abandon is probably what makes her fast.  She runs with perfect form.  Arms swinging, relaxed shoulders, mid to fore foot strike, lightly springing along with a quick cadence.  Perhaps to become a better runner, I should strive to run like my child, for the joy of running, rather than the results.

In doing so, I suspect I would become a far better runner.  After all, if I raced the ocean without fear, I surely would beat it every time, just as she did.
Posted by gba_gf at 1:43 PM 5 comments:

aka. the one where I avoided prison, but only just barely

No matter what sub-team, for the most part, it's about the unified TEAM experience.

We train together on the same roads, support each other, banter with one another, and it's like a big happy family.

There's the "dad-type" who tries really hard to make us behave.  The older sibling's who look out for the younger siblings.  The step siblings who seem a bit odd but we like them anyway.  And of course, like any family, there's sibling rivalry.

I like a little friendly competition.  It keeps things interesting.  Even when I have to concede a loss, I'm more than willing to do so as long as it's in good fun.

However lately I have met a runner who can’t stop talking about his epic running.  He goes on about how he’s so fast, and 'you're' so slow, and how it's rare to meet people as “fast” as him, etc.

Yo, I’m sure you’re ‘Great’ and all, but do you know how badly I just want to tell you to STFU?

I think I should tell you all that he almost died the other day.  Yes, it’s a 100% true story.  After our run, he said something that was so offensive to me that I had to physically stop myself from gunning him down in my sucktastic beige minivan.  My hand hovered over the gear shift as I struggled with life imprisonment or having to listen to this crap for 18 more weeks.

“I’m surprised you’re that tired, you only ran an XYZ pace...”

Really?  Are you fecking kidding?  Did you just go there?

Seriously, that has to be the dumbest thing I have ever heard anyone say in my entire running life.

Honestly, it’s as though he woke up one day as a self claimed fast runner, and completely forgot how he “got” to that level or where he started.  And it's true, he's fast.  He's a speedy guy.  He's stupid about how to talk about it, but he can run.

Which brings me to the next point.  Badass runners are not a**’s who brag about their epic-ness to slower runners all the time.  Being GBA**, Galactically Bada**, is NOT about being fast.  There is a bit of humility that has to come into play.  Or if not humility exactly, then, at least respect.

I’m not a sucky little runner.  I’m not.  Even in a slump I deserve more respect than this dude gives me.  And what annoys me is that he will never understand that, because the only reason he would respect another runner is if that runner beats him on a run.

I keep praying that one of these weeks he’s going to get an invite to run with Coach Black and Those People so they can put him in his place a little and serve him up with a slice of humble pie.
~a little bit, yeah~

And then I think, oh hell no.  I wouldn't want them to have to spend that much time with his ego.  I like Those People way more than that.