SO I didn't try out a triathlon today.  I did it.  Did I kick booty?  Did I like, totally ROCK?  Did I fall, embarrass myself in transition as I got tangled up in my clothing, all as some woman yelled, "Ladies, Get MOVING, don't get STUCK in transition 1"?


ARRIVAL:  T arrived at my house at o'early hour, and we arrived at the race at o'dark thirty.  We got set up in transition, where T snapped this photo of me. 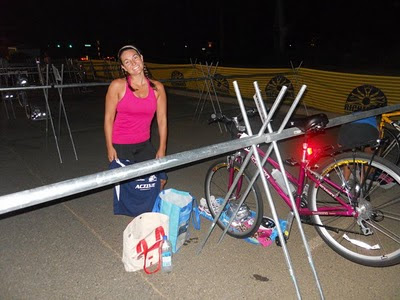 And then we got marked and did a little wandering around.  In all that wandering around we moved my JEEP from one space to another, incase we decided to leave as soon as we finished. 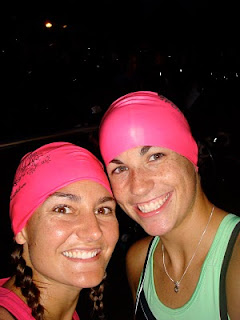 SWIM:  I decided to just swim in my bra & bike shorts, leaving my top at transition.  On one hand, thank goodness I did that.  The bra was filling with water, it felt like it was being pulled down to my waist the entire swim.  Imagine what I would have felt like in my tank top?  I seeded myself in the 7:30 swim time, and I'm not sure that I did myself any favors by being so honest.  I seeded myself based on my BEST time trial, so it was a real race for me to stay ahead of the girl behind me.  I got a mouthful of water (=BAD) and I had to come up for air on that, and then, around 2/3 of the way through the swim, I felt my chip start to flap.  I had to stop and tie it back on.  It only took a second, and I let the girl behind me go ahead at that point.  For much of the swim I was stuck just behind someone who was speeding up and slowing down... I wasn't strong enough to pass her outright, but I was faster than she was for moments at a time and that was annoying.  It's really hard to swim in someone's wake like that.  She and I finished at just about the same time.  By the end of the swim I was really out of breath, and was barely able to drag myself out of the pool.  With my sponsor (more on him later), my personal cheerleader, and best friend watching.  It was a little embarrassing, I wish I could say I rocked the swim, but with two mouthfuls of water swishing in my stomach, I was off to transition feeling a little less than glamorous.


T1:  Got tangled in my shirt, got my shoes on, fell on my butt, got yelled at by some lady who was trying to give encouragement but whatEVER, got my watch on, go my helmet on... got my bike off the rack (harder than it sounds), and got moving in the right direction.


BIKE:  I mounted at the appropriate moment, and got rolling.  My gears had been jostled on the car rack, but within a few seconds PINK and I were on our way.  Pink and I hate hills.  This course was ... up.... and down... and up... and down... and I think I held my own, but who really knows.  I passed quite a few people, and got passed by some seriously beautiful bike riding ladies (form, bent over their aero bars, streaking past with a kind word = beautiful).  Before I knew it, the bike was over.


T2:  Hopped off the bike. pulled off the helmet, grabbed my GU, my visor and my glasses, and took three steps toward the exit when I realized a) my legs were worse than during any of my bricks and b) I'd already dropped my GU.  (it was on my towel). and c) that the a nice race official was waving at me, and he turned me around and pointed me in the other direction toward the run exit.  awesome.


RUN:  The first mile of the run was down hill... so what does that mean?  The last mile would be all up hill.  Bummer.  I spent my entire run thinking about that.  My first mile was probably really fast, def around an 8:30.  My last mile, not so much.  Anyway, somewhere early in the run I ran past Dave.  Dave looked surprised to see me, but I think I may have just startled him.  It was nice to see a familiar face on the course!  Down the hill, Around the lake, Up through a neighborhood, Up across an intersection, Up a walking path, Up the last hill until...


The FINISH:  The finish was on a soccer field.  My legs, already shot, rebelled at this point and refused to go any faster.  I felt as though I crawled across the finish line.  I'm sure the race photo will reveal my pain, so it's likely you'll neeeeeever see it here.  I had no idea what I'd done it in.  A VERY nice lady handed me an ICE TOWEL.  BEST.  THING.  EVER.  I rubbed my legs down with it.  Then I grabbed a bagel, and wandered up to the pool to cheer for the last swimmers.  I was done, before the last swimmers were out of the pool!  And I suddenly had a thought that the bike racks were very empty, so I started counting racks, and sure enough, T's bike was absent.  So I knew I might be able to cheer for her in transition 2.  Maybe 5 minutes later there she was, and I shouted her name.  I'm not sure she heard me.  Her transition was super speedy and she bolted out again.


I finished in 1:28:09.  It's not going to break any land speed records, but it's certainly respectable I think. 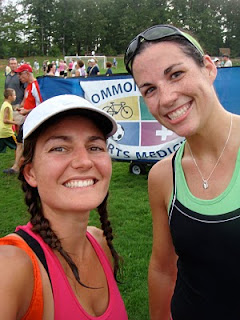 Here's me & T right after her finish.
Go check out her race report, once it's up.  It's bound to be awesome. I don't want to spoil her fun!
And remember when I said I would mention my sponsor later?  Well, it was an all female race, so he dressed in drag and did the swim, bike, and run to support us all! 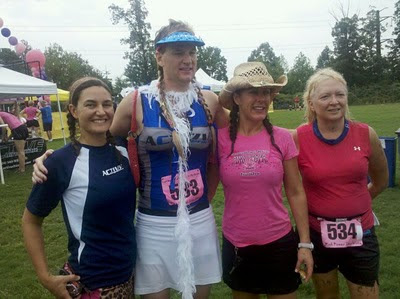 Way to go. You were in my prayers all morning.

Great job, your inspiring, was thinking of you today, you so did not embarrass yourself, well done for pushing yourself out of your comfort zone, you rock.

Y'all make a tri sound so much fun. :) I'm definitely going to have to do that someday.

You got to swim in a pool??? LUCKY! Sounds like you totally rocked it, girl, awesome job!!

I liked all the details of clothing malfunctions in this roundup...made me feel like I was there with you. Congratulations on your big accomplishment. Do you ever not have such a big smile?! (I love it.)

Great job! Sounds like a really fun experience. Totally LOL at your sponsor!

Nice Race!! Gosh, you guys make me wish I wanted to try a TRI! :) I'll never say never but swimming and biking just doesn't sound fun to me. You make it sound fun though! Congrats!

Yay I'm so proud of you. I'm going to show up at one of these one day and cheer you on.